“Obruney, obruney! [white man, white man]” the little black girl screams as she runs into the street, arms flailing from side-to-side, as I pass her home. I wave back and immediately my frown turns into a smile.

It’s scenes like these that can turn any depressing day into a happy one. I was always walking the streets of Accra, even though it wasn’t a very good idea due to the city’s lack of pedestrian infrastructure, horrific traffic and air pollution.

That reminds me. A simple ride on Accra’s “tro-tro’s” (public transit mini-buses) was a testament of faith. Everyday on my way to work, I walked a few kilometres to reach a tro-tro station to take me on what should be a quick 15 minute ride, but this would turn into an hour of traffic snarled sweatiness. 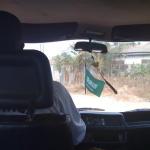 When I hopped on the ‘tro,’ as everyone in Ghana calls it, I would bend over to make sure my backpack would fit in as well and I would quickly try to strut my bended legs next to the window seat, because it would become so unbearably hot during the ride and the window is where I could get some fresh air.

Sweat would start to drip off my brow and cause temporary blindness as I would read my book. I’d look around and see everyone else with handkerchiefs wiping their sweaty brows. The ‘tro’ would bounce to the rhythm of Afro-beat tunes blaring out of the speakers, causing further interruption to my reading, especially when I knew the lyrics to the song. Usually a Fela Kuti jam. So frustrating.

By the time I made it to work, I’d be shoved in front of a microphone to give my daily take on whatever international events or conflicts were taking place, focusing mainly on the African continent, so I got to know events in Mali, Central African Republic, Congo (DRC), Kenya and South Africa in-depth.

In the afternoon, I would continue with developing international stories and provide up-to-the-minute coverage, which was unmatched in the local media, if I can say so myself. Forgetting my ego for a moment and getting back to what I was saying, I would be the only one in the newsroom willing to go out into the blazing afternoon sun and ask Ghanaians important questions of the day.

I would construct “vox pops” or “streeters” whatever you want to call it. Basically, it’s just asking half a dozen people what they think about a subject you find to be interesting and may appeal to the listener. My “vox pops” ranged from day-to-day. One day I was in-studio doing a live report when the power shut off and the lights went off with it. This made me pause for a moment in the middle of my delivery.

I was left to ad-lib the rest of my story. Luckily “the art of bullshitting” as I call radio broadcasting came in handy for me that day. But I was left wondering how Ghanaians handle the frequent power outages, so I took this idea to the streets of Accra and heard a range of interesting opinions, making it a compelling vox pop, as others told me personally afterward.

I also spent the latter half of my time in Accra working on radio documentaries. But before that I put together three international news programs. In the first, I interviewed Samia Nkrumah, the daughter of Ghana’s independence hero Kwame Nkrumah. I also had the chance to meet former United Nations Secretary General Kofi Annan during my ambitious, but short-lived program.

In the end, I was only working at the radio station long enough to produce three weekly international current events programs

independently. I was trying to reach out and work with other staff producers, but unfortunately they weren’t interested in staying late to complete the extra work. I found out later they weren’t even being payed for their regular work hours, so I can’t blame them.

I finished my contract at the radio station and switched gears to follow a few documentary ideas I had from reading and listening to the news. My two radio documentaries were completely different from each other, but tell one exciting story, that of a city in development, placed on a continent still in need of fresh ideas and perspectives to challenge the dominant, political class.

3 comments on “Accra, Ghana: The city of African liberation”