Reaching for the stars! Arusha’s Lengo Football Academy was founded six months ago by the 28-year-old Emanuel Saakai (back left).

ARUSHA, Tanzania — Emanuel Saakai is a 28-year-old Masai born in Ngorongoro, Tanzania, near the world famous wildlife crater. At age two, his mother moved him to Ngaramtoni, a poor village on the outskirts of Arusha nestled alongside Mount Meru. As a boy he would play soccer in the dusty streets from dawn to dusk.

“You know football means a lot to me in my life in general. And as a boy I wanted to get to the top to be a professional footballer and I couldn’t because of several reasons. First of all, my family was poor and couldn’t afford giving me football boots and shoes,” he said.

Not wanting to give up on the sport he loves, Saakai turned to coaching kids in his village. Six months ago he started Lengo Football Academy, to teach them the fundamentals of the game.

“It started with a few, maybe ten or fifteen, but now, you can see we have more than 80 kids. And the number is still going up. It’s going to be up to me now to be able to financially support them. I have to limit the number so I can afford to accomodate them.”

Saakai uses money raised from a recent trip he took to Melbourne with his Australian wife, Tracey Sawyer. He is now able to transport and feed the kids. While in Australia, Sawyer introduced him to professional soccer coaches who provided training as well as a few donations for his upstart soccer academy.

To date, he has received four soccer balls, 60 jerseys and 50 pairs of shoes. The kids love their new gear, but there aren’t enough shoes to go around for their first match, so many are left to play bare foot. Saakai reflects on the time he was their age and wanted to play.

Lengo means ‘goal’ in the KiSwahili language. Sawyer could see the passion for teaching soccer in Saakai’s eyes when he began coaching part-time following a knee injury that devastated his confidence and career as a rising soccer star in Tanzania.

“You know I came in when he’d been with this other academy for four years. It was clear coaching was in his blood. He got involved with my charity and talked about his passion for football,” Sawyer said.”He was still coaching and not being payed to do it. In the end I said start up your own academy and I’ll support you any way I can.”

Sawyer founded an NGO in Tanzania four years ago called Testigo Africa. Her and Saakai work full-time on a permaculture 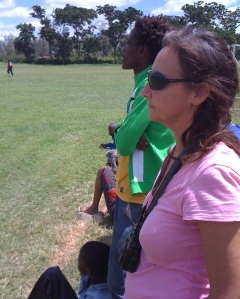 Emanuel Saakai with his wife and Lengo’s biggest fan, Tracey Sawyer, on the sidelines.

project in the Masai village of Longido, which is about an hour drive outside of Arusha. These Ngaramtoni kids are grateful that even though Saakai has a day job, he’s still able to dedicate so much time to their development.

“They’re coming from the street and others are being raised by single mothers, others go to primary school, others secondary school, others don’t go to school at all. I have got orphans as well on the team,” Saakai said.

In 2009, Alfred Itaeli founded Tanzania’s Future Stars Football Academy. Ever since, he has been teaching kids soccer, focusing mainly on community development in the Arusha region. Itaeli sees potential in Saakai’s coaching abilities and enjoys helping out any way he can.

“We did a coaching clinic for trainers. Emanuel heard about it and he contacted me and I said ‘karibu’ welcome. So he participated in a week-long course. That’s when I knew he had a team of different ages, so I said let’s organize something,” Itaeli said.

As the under-11 Lengo team takes the field, in the very first Lengo versus Future Stars match. Coach Itaeli yells from the sidelines at his players, commenting on how lucky he felt when he was given a chance to play as a boy. Itaeli went on to play semi-professional soccer in the U.S. before returning to Tanzania and establishing his academy.

Lengo does not yet have the financial or community support Future Stars has in Arusha, but it looks promising for Saakai, who networks night and day with Tanzanians and ex-pats alike to show the changes he has made with these kids in such a short period of time.

Sam Mpenzu is delighted with the rise of rival soccer academies in Arusha. He works as the coordinator of a sports development organization called Yes! Tanzania. Mpenzu is also a soccer trainer and FIFA referee, who stresses the need for education to work in tandem with sports training.

“During my time, education to me was like nonsense. But when my teachers knew I liked sports, they used sports as a tool to make sure I’m attending my lessons at school, so they put the P-E [physical education] lesson at the end of the day.”

Up until only a few years ago in Tanzania, playing sports wasn’t even allowed at schools. This is the reason why it has taken kids in the East African nation so long to embrace this global game.

“Years ago there was a minister of education and he decided that kids were being distracted by sports, so he actually banned all sports, so for 10 years in Tanzania there was no sports in any of the schools,” Sawyer said. “A lot of parents thought it was distracting, so they wouldn’t even let their kids play sports outside of school.”

Nobody knows how hard growing up in Ngaramtoni was for Saakai more than his wife. She believes that in spite of all the challenges he faced in the past, he remains a role model for every kid in Ngaramtoni.

“He’s had to do jobs where he’s broken stones for the equivalent of a dollar a day. He knows what it’s like to be hungry and have no food for days, so he’s very aware that these boys have the same background,” she said.

Coach Itaeli’s Future Stars dominate the match from start to finish. As the whistle blows, his players walk off the pitch. They’re easily identifiable due to their matching white shirts, shorts and socks. While the Lengo squad head toward the sidelines, shirts are untucked and socks are mismatched, if they’re wearing any socks at all. Saakai delivers his post-game analysis with a smile.

“They played against a team that has been training for so long. It’s a good performance for me. They worked more individually and not in a team. That’s why sometimes they forget they’re in a team and they allow the opponents to come against them and concede a lot of goals,” he said.

Looking on as the Lengo team sits near the sideline listening to their coach, Sawyer is happy with the outcome. But the players have a look of disappointment in their eyes. Saakai is expressive while he tries to cheer them up, but he mentions how important it is that they learn from this experience.

Sawyer interjects: “He’s a true coach. It’s in his blood. It’s a natural talent and passion for him. He’s actually said now that he thinks he’s a better coach than he ever would’ve been a player. His ambition goes beyond this academy.”

Lengo Football Academy is still hoping to receive more donations and contributions to keep Saakai’s dream of building a world class soccer training school in Arusha alive. He also hopes his coaching will give these Ngaramtoni kids life lessons so they can also rise out of poverty and make real change in Tanzania, whether that be through soccer or not.

“They’re so happy to be a part of the academy. Before they were just kicking the handmade balls on the streets. Right now it’s a little different because they play with a vision and I can see they’re appreciating what they’re getting. This is the main reason for setting this up,” Coach Saakai boasts.

This story was first published on the Toronto Star – JHR Africa without maps section.