A Visit to the Cemetery of Polish War Refugees in Tengeru 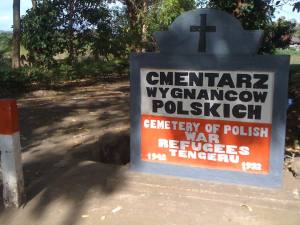 I stepped off the dala-dala mini-bus along the highway and immediately felt the intensity of the blazing mid-day sun. It’s not ideal to do any strenuous activity in the afternoon in Tanzania, but today I was on the hunt for something a little unusual, a cemetery.

A Canadian friend of mine living in Nairobi, Kenya was in Arusha for the weekend. A journalist like myself, he decided to contact me a few weeks before inquiring about a little known cemetery outside of Arusha for Polish war refugees. Immediately I started doing some research. The only thing I could find online was an article published in the Arusha Times newspaper a few years ago.

I led the three of us, including another Canadian journalist, into the Tengeru market. On Saturdays this is one of the most bustling markets in northern Tanzania. We cut our way through the crowds and made it to a boda-boda motorcycle taxi stand at the other end of the market. I asked one driver in English if he knew where the Polish cemetery was located. I received a blank stare, so I turned and asked another. This time I got a response in English. He said: “I know it. I can take you there.”

“How much?” I asked. “2,500 shillings each,” he responded. Each one of us got on the back of a different boda-boda and we were off. A 10 -minute ride through rural countryside brought us to the campus of the Livestock Training Institute. This collection of buildings once housed the 5,000 Polish war refugees that arrived during the Second World War.

When we arrived at the gate of the cemetery, we were all reaching for our cameras in awe of the beautiful surroundings. A manicured lawn and flowers encircled the grave site while off in the distance you could spot Mount Meru on one side and Mount Kilimanjaro on another. Quite a majestic burial place.

Approaching the gate, a lone man emerged from the side of the entrance. He introduced himself as Simon Joseph, the sole groundskeeper and, as it seemed to me, landscape artist. Joseph unlocked the gate and let us enter. The three of us fired questions at him almost like it was a media scrum. We were just enthusiastic reporters looking for possible story angles to pitch to newspapers back home. If there was a Canadian angle, of course.

Unfortunately, there wasn’t one. But we did read up on the history of why and how these Poles came to call Tanzania home. I’m going to be honest and say I can’t remember the exact details or dates, but they were fleeing the Nazis, so what else is there to add. The one thing that stuck out in my mind the most from the trip to the Polish war refugees cemetery in Tengeru was the five Jewish graves.

As per Jewish tradition, these Poles were separated from the Catholic majority and had their own area within the graveyard, segregated near the wall. And Joseph recounted the terrible violence they were fleeing as refugees, as the world would be shocked to find out soon after they fled. In all, I thought a day trip out to the Polish war refugees cemetery in Tengeru was one of the highlights of my time in Tanzania so far.

We thanked Joseph for his time and effort in maintaining this important historical site, because we all knew it was a monumental task to cater to non-paying tourists. “I accept charitable donations,” Joseph said as we made our way to the gate. All three of us looked at each other like we were offered a bribe. As a journalist on a story I couldn’t give any money but I didn’t judge those who did.

For more background and photos from the day, check out Jared Knoll’s story in JHR’s Speak magazine.