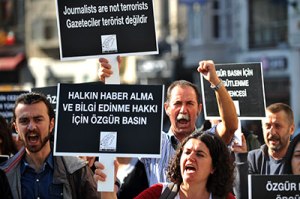 Turkish journalists protest for media rights in Istanbul on November 5, 2013. Demonstrators proceeded at a rate of one step per minute to highlight the slow process of justice in Turkey. (AFP/Ozan Kose)

211 journalists were jailed worldwide in 2013, following the highest number ever recorded the previous year: 232, says the press freedom group Committee to Protect Journalists, or CPJ.

These statistics prove the state of press freedom around the world has deteriorated quite drastically over these last two years. Three countries: Turkey, Iran and China, account for almost half of all journalists imprisoned.

For the second year in a row Turkey is known as the world’s leading jailer of journalists with 40 behind bars, even though nine more were released this year than last. New legislation in Turkey allows journalists to be released for time served during lengthy pre-trials. As of December 1, 2013, Turkey also released additional journalists after CPJ completed its prison census.

Iran comes next on the list with 35 down from 45 in 2012, while China remains steadfast in its amount of journalists behind bars at 32.

In Africa, Eritrea, Ethiopia and Egypt, known as the “Three E’s,” are the three worst jailers of journalists on the continent.

Eritrea is a long-time opponent of press freedom and has been holding 22 media practitioners incommunicado since its crackdown began.

Egypt, included again on this year’s list, locked up five journalists in 2013, including two reporters from the Al-Jazeera network. On December 29, 2013 Egyptian authorities detained another three, this time from its sister station Al-Jazeera English.

Press Freedom watchdog Reporters Without Borders, or RSF, states: “The anti-terrorism law is one of the most serious obstacles to the promotion and protection of freedom of information in Ethiopia. Ever since its adoption, the government has used it as a legal tool to clamp down on dissidents and create a cloud of fear that limits the ambition and activity of the media.”

Both CPJ and RSF along with International Media Women’s Foundation, or IMWF, are calling on the Ethiopian government to release Ms. Alemu immediately.

The CPJ also states 70 journalists were killed on the job in 2013 with motives confirmed, while another 25 died with no clear motive. Four media workers were also killed last year. Syria ranks as the country with the highest number of fatalities: 28 journalists dead. Syria is followed by Iraq, 10, and Egypt, 6.