Kenya: A Case of Media Mentorship in Africa’s Largest Slum 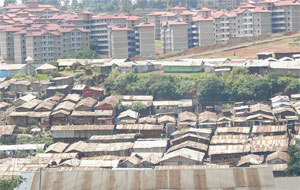 Kibera and the slum upgrading project.         Courtesy of The Standard Group

“The mentoring culture needs to come back to our newsrooms,” said Ernest Sungura, executive director at Tanzania Media Fund, while addressing journalists at the World Press Freedom Day Conference in Arusha May 3.

The theme of this year’s Arusha conference was Media Freedom for Good Governance and Development. I would argue mentorship needs to be taken out of newsrooms and into the streets, where journalists can learn on-the-job.

For the second year in a row, I participated in the two-day event, which discussed issues like press freedom, ethical reporting and the need to abolish repressive media laws. Over the course of the two days I met with Tanzania Media Fund, UNESCO and BBC Media Action. These three organizations work tirelessly with journalists to develop their capacities as well as support investigative journalism.

The late Colombian writer, Gabriel Garcia Marquez once wrote: “The knowledge that ‘investigative’ journalism is not something special, but that all journalism must, by definition, be investigative.” This is something that resonates with me and I try to address while working with other journalists.

Unknowingly, I really began working in media development while I was studying at Concordia University in Montreal. I had the opportunity to train students at Concordia University Television, or CUTV. I brought the CUTV news program from the third floor office out into the streets of Montreal to connect with the community. While on-the-street I would mentor students on how to operate the camera and produce great audio in a non-studio setting.

I also hosted and produced a weekly radio program on CKUT FM in Montreal. The show focused on human rights and press freedom, so I worked with a few friends from Journalists for Human Rights, or JHR, to make sure they understood how to produce weekly reports for my program. I had student journalists across Canada submitting reports and mini-documentaries that gave the show a sense of professionalism. I helped them tell these human rights stories and have their voices heard.

Not long after this, I was working in the CBC Montreal newsroom, when I was contacted by a Ghanaian friend who asked if I’d be willing to help turn a new radio station in Accra, Ghana into a reputable news organizaion. I agreed and began making arrangements to go to West Africa. I quit my research newsroom position at CBC and came to Africa. The rest is history.

I worked in the Pravda Radio newsroom helping journalists write scripts, produce high quality audio interviews and reports while meeting their tight deadlines. But taking a few of the reporters out of the newsroom and into the city to meet and speak to ordinary Ghanaians was the most memorable experience. None of the reporters I worked with had this chance before I arrived. Often, Ghanaians would approach us on-the-street and ask if we were working with the BBC, as only BBC reporters would be seen regularly talking to people in Accra.

My experience in Ghana made me realize how fulfilling media development work actually is. After traveling around West Africa, I decided to head south and meet with another organization working in this field, empowering youth through radio, Children’s Radio Foundation. While working as a freelancer in South Africa, I landed a six-month contract with JHR in Arusha, Tanzania. 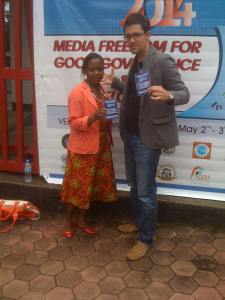 Rotlinde Achimpota and I outside of AICC on World Press Freedom Day.

I provided media training to the Mambo Jambo Radio newsroom. I formed a bond with staff, one which continues to this day, as I provide on-going mentorship with three reporters there. One in particular, I’ve worked with often and still help in developing her investigative reporting skills, is Rotlinde Achimpota.

The two of us spent time almost every day together working on human rights and good governance stories. Whether it was about the land rights of the indigenous Maasai or human rights abuse faced by persons with albinism, Achimpota was always interested in learning more about pressing issues in Tanzania.

I have since done media training workshops for Pastoral Women’s Council and Vikes Finland. But my real passion is for mentorship. I believe spending time with journalists is the only way to effect real change in the media. As workshops and training sessions add little to a journalists repertoire, mentorship helps them work through the difficult terrain they encounter day-to-day.

My latest mentoring venture has been with a young Kenyan student journalist. I met Godwin Oyindo last year while I was visiting Nairobi’s Kibera slum with reporters from the Ghetto Mirror newspaper. I was working on a story about the burgeoning community media scene in Kibera. Oyindo told me how he had written a few stories for the newspaper while studying economics at Kenyatta University.

I could see Oyindo’s passion for media, as he spoke of his love for radio. I proposed a workshop for Ghetto Mirror and Pamoja FM staff, the community radio station in Kibera I visited on my tour. After months of not getting a response from the director at Pamoja FM, I decided not to give up and instead focus on mentorship for aspiring, young, journalists who live in the slum.

I followed up with Oyindo on another recent visit to Nairobi, when we planned out how to tell the story of slum residents who were relocated to a new housing project. Family friends of his live in the Kenya Slum Upgrading Project, known as KENSUP, and would be willing to discuss how life has improved very little since moving in.

For the next few weeks, while I was back in Tanzania, I kept sending Oyindo background information I had read on the slum upgrading project and he dutifully read the texts, all while studying for his university exams. He shows great promise and I truly hope he decides to become a journalist some day. We returned to Kibera last month and produced a great radio documentary about the plight of residents and how a government upgrading project is failing them.

One comment on “Kenya: A Case of Media Mentorship in Africa’s Largest Slum”