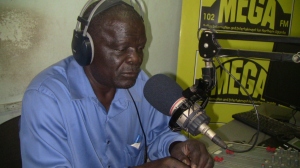 KAMPALA, Uganda – There is a corner in towns and cities across Uganda where there stands a memorial to the lowering of the Union Jack in 1962, which signaled the sunset of British colonial rule and the dawn of independence. In the northern city of Gulu, the monument is situated near the building which houses Mega FM, charged with transmitting a powerful message not only in Uganda, but to many parts of East and Central Africa.

John Lacambel, a 64-year-old father of 13 children, has passed this independence memorial every day for the last 11 years as he enters the Mega FM studio. As he strides down the station’s hallways, he passes certificates of appreciation which adorn the walls. These accolades have been showered on Mega FM to support its peace-building efforts via the radio dial in northern Uganda.

Leading these efforts is Lacambel. Admired by colleagues and loved by listeners, he has made this community radio station one of the Uganda’s most popular through his hosting of its longest running program.

Like clockwork, he takes his seat in front of the microphone, puts on his headphones, and slides up the volume control in order to begin his program. In the Luo language, he says, “Hello! This is Lacambel here at 102 Mega FM. It is Thursday and the time is now 10 p.m. This is Come Back Home.” Come Back Home is known as Dwog Paco in Luo, a language commonly spoken in Uganda, Kenya and DRC.

Tonight, Lacambel’s phone rings shortly after the show ends. He has a brief conversation with the caller, and then explains, “That was a former LRA general. He’s one of my listeners. He wanted to comment on this week’s program.”

During the height of the 20-year-long brutal war with the Lord’s Resistance Army in northern Uganda, Lacambel was broadcasting Come Back Home up to three times a week to counter LRA propaganda. As part of their reign of terror, the LRA would tell abductees that if they returned home, they would be arrested by Ugandan soldiers or killed by family and friends in the community.

A warrant for Joseph Kony’s arrest, along with three of his deputies, was issued by the International Criminal Court for war crimes and crimes against humanity. Finally driven out of Uganda, the LRA is now believed to be located somewhere in the area between Central African Republic, South Sudan and DRC, terrorizing people wherever they go.

Lacambel’s phone rings frequently. “Yesterday I received a call from someone in eastern DRC. They told me they listen to the program and wanted some assurance that the LRA was not in their village,” he says.

Come Back Home is retransmitted via shortwave by the Uganda Broadcasting Corporation, or UBC, and can be heard where Kony is believed to be in hiding. With the help of U.S.-based organization, Invisible Children, Mega FM is trying to reach a much larger audience with its signal.

“Through Invisible Children we have a network of radio stations which rebroadcast the program. They also air from helicopters the Come Home messages I have recorded,” Lacambel says. “We’re also constructing a shortwave transmitter so we don’t have to rely on the UBC signal from Kampala.”

David Olara, 31, was born-and-raised in Gulu, Uganda. He’s been listening to Come Back Home since he was a boy. This is when his family moved him into the town, fearing he would be abducted with other children into the LRA.

“Lacambel is very experienced in the field. He’s a gentleman and a peace-loving guy.” Olara says. “Through his skills in communication, the abductees were encouraged to come back.”

Invisible Children partner with 11 radio stations in Uganda, DR Congo, South Sudan and the Central African Republic. The organization states its objective with Come Home broadcasts is “to reach deep into the bush, encouraging individuals or entire groups to surrender and escape the LRA.”

“Now because there’s peace in northern Uganda, I’m on-air once every Thursday night,” Lacambel says. “I chose the 10 to 11 p.m. time slot for the program after speaking to child returnees to find out the best time to broadcast. They told me this was the time they finished marching in the bush and began to rest.”

Nicky Afa-ei is program manager at Mega FM. He says Come Back Home was originally started to give the parents of LRA abductees a voice. They would go on-air with Lacambel and plead for their children to return.

“LRA soldiers carry radio sets in the bush. When abductees would surrender we would also host them to tell their comrades how they have resettled safely in the community,” Afa-ei says. “It became such a vital program. Now most returnees are listeners.”

Moses Odokonyero used to be a news editor at Mega FM. He is now a program manager at the Northern Uganda Media Club, or NUMEC, a training centre based in Gulu.

“At one point during the war the LRA banned its soldiers from listening to the radio. Many were killed for simply tuning into the Come Back Home program,” he says. “Lacambel’s agenda is to end the LRA, but as the primary conflict has ended secondary conflicts have arisen.”

As Lacambel exits the Mega FM premises, he tucks the newspaper under his arm and heads out into the street. He says, “I feel proud when my voice is helping people. I feel I’m serving my fellow Africans and contributing to peace on the continent.”

One comment on “The Ugandan Radio Show That Saves Lives”