Home › Photography › My Community, My Radio, My Mahad: The story of a Juba IDP settlement

My Community, My Radio, My Mahad: The story of a Juba IDP settlement 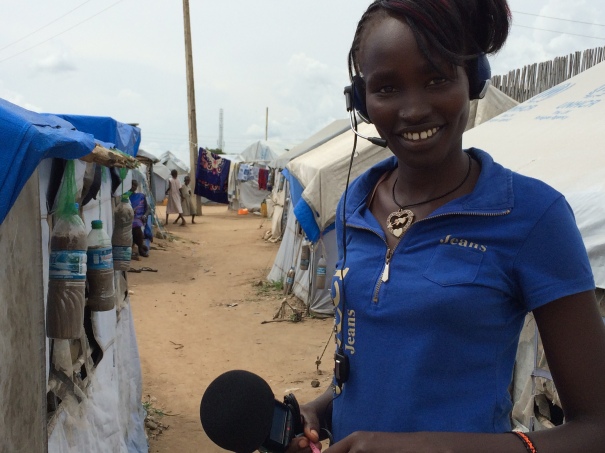 Riak Akech learned how to record audio and conduct interviews.

JUBA, South Sudan – “I enjoy doing the radio program because it makes me feel like a journalist. I would like to learn more about journalism,” said 18-year-old Internews trainee, Riak Akech. “There are many things I don’t know. By talking to my elders at Mahad, I can learn so much more.”

Mahad is an Islamic primary school located behind a mosque on Konyo Konyo Road in the heart of Juba, South Sudan. The school’s administrator, Nur Kur Nyang, allowed displaced South Sudanese to settle on the school’s property over one year ago.

Most of Mahad’s displaced residents come from the restive states of Jonglei and Upper Nile, where much of the early fighting took place when the conflict between South Sudan President Salva Kiir and his former Vice President Riek Machar began on December 15, 2013.

Akech moved back to Juba earlier this year from Kenya’s Kakuma refugee camp. Her family fled her home in Eastern Equatoria state of South Sudan across the border to Kenya when fighting started.

She returned with her family six months ago and started working for Terre des Hommes, a non-governmental organization providing psychosocial support for the children in Mahad. This includes providing a Child Friendly Space, where kids living at Mahad are able to play games and learn in a safe and secure environment.

I taught Akech how to record audio and conduct interviews in the community. She learned so fast that by the end of the first week, we had an audio program ready to air for Mahad residents.

We called it My Mahad and episode one featured Nur Kur Nyang and others in the community talking about the history of settlement at Mahad.

“It was giving them voice,” Akech said. “It helped people by letting them talk about the issues they face.”

12-year-old Akur Mayen Kur is an aspiring singer. His angelic voice is featured at the beginning of the first two episodes. His insightful lyrics welcome people from around the world to Mahad, and call for peace in South Sudan.

Kur also helped out with recording messages of love and peace from Dinka women elders in Mahad. They were sending these messages to family and friends in Bor, the capital of Jonglei state. He also loves to listen to My Mahad on the community’s Freeplay Radio.

Each group at Mahad: Dinka, Anyuak and Murle, received a wind-up, solar-powered radio. I also gave one to the TDH-run child friendly space to play for kids, all eager to listen to My Mahad.

The youth in Mahad don’t have access to school. Only a lucky few are attending afternoon classes outside of the community. Most youth are left idle in Mahad with nowhere to go and nothing to do.

Mahad is almost entirely made up of women and children. Of the estimated 3,000 internally displaced people living here, over half are kids.

A Mahad youth peace group performs street theatre and marches through the community to educate and inform the women, and few men around, taking a break from the afternoon heat.

The Mahad youth group listens for the first time to their mini-drama in episode six.

In My Mahad episode six, a peace building drama performed by this youth group expresses the need to avoid tribalism in South Sudan and makes calls for reconciliation as well as an end to the current conflict.

Akech conducted dozens of interviews over the course of the month of June. It became a community-supported humanitarian information audio program that was played on the radios via SD card. Each episode was loaded on to SD cards and played at various collective points in Mahad.

The SD card with all the up-to-date episodes stayed with each radio, so it could be played continuously once we began recording the next episode. Once a new one was finished, we would reload on to each card.

Up to this point, Internews in South Sudan had only worked in Juba, Malakal and Bor UN protection-of-civilians sites to produce this kind of targeted programming. The Boda Boda Talk Talk program was started shortly after the conflict began.

At Mahad, a non-UN protected IDP settlement in the centre of Juba, we covered security, sanitation, education and health, all in the community’s three traditional languages (Dinka, Anyuak and Murle) including the two national languages (English and Arabic).

It was, at times, difficult, but we did our best to allow people to speak in any language they felt most comfortable with. This allowed us to record interviews with members from each group on different occasions.

During my time in Mahad I met a 19-year-old woman named Rimas with two young children from Nuba Mountains in Sudan. She was sharing accommodation with a Murle family.

A Murle family from Pibor, an administrative area in Jonglei, listens to episode four.

Rimas told me about her journey from Nuba to Juba, by foot, over two years ago.

Fleeing violence in Sudan, she made her way south via Bentiu, Unity state and Rumbek, Lakes state, only to discover more violence at each stop until she reached South Sudan’s capital city, Juba.

“There was fighting in Nuba, fighting in Bentiu and Rumbek. I came to Juba and the fighting started here,” she said.

Helen from Malakal, Upper Nile state shared with us a harrowing story of losing her husband and making her way to Juba with her children by boat along the Nile River, only to end up at Mahad which is only a short distance from the port of Juba.

Mahad is anything but a depressing place. The children are always playing and acting the way kids should act. The women are welcoming and always have a baby on their backs while cleaning, cooking or fetching water.

In fact, the organization that handed over camp management to the community last June, People in Need, told me an amazing story about how the community has risen to the challenge and completely taken over water distribution.

One South Sudanese pound (.10 cents) buys you a jerry can full of water. This money is then funneled back into the community.

Sanitation is still a big problem, as it is in most informal settlements, but the community is looking at ways to resolve this issue on its own. 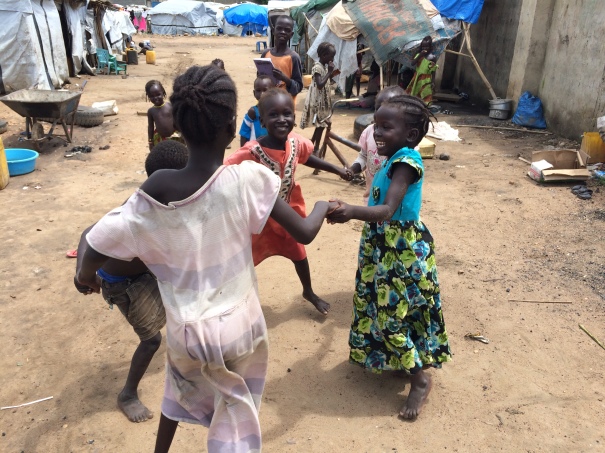 * The My Mahad episodes were recorded and played for each group in the Juba IDP settlement of Mahad throughout the month of June, 2015.