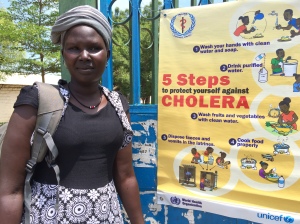 BOR, South Sudan – Rhoda Ateng enters the gate at the Bor state hospital carrying her backpack with a radio recorder and headphones inside. She passes a makeshift cholera treatment centre, situated near the hospital entrance.

Peace has returned to the restive capital of Jonglei state, but residents’ lives have yet to return to normal.

An elderly man enters the compound, after Ateng, with the aid of a walking stick. He approaches the entrance of the cholera treatment centre and lifts up his right foot. Two young men spray it, then the other foot, with chlorine to disinfect the bottom of his sandals. The man washes his hands with the same liquid concoction in a basin and is allowed to enter for treatment.

Ateng scribbles into her notebook. To date, 114 cases of cholera have been confirmed since June 15, 2015 in Jonglei state. One person has died as a result of the bacterial disease that causes severe vomiting and diarrhea. An outbreak of cholera is usually caused by contaminated water.

“I worked as a nurse before the conflict reached Bor. I used to give people proper hygiene information. There are many preventable diseases in South Sudan, but people lack correct information,” Ateng said.

“The crisis” as it’s known to South Sudanese, displaced hundreds of thousands when President Salva Kiir accused former Vice President Riak Machar of planning a coup d’état, the overthrow of the government in Juba. Fighting broke out between forces loyal to Kiir and Machar on December 15, 2013.

Ateng, 27, lived in Bor with her husband and two children. Once the fighting reached the Jonglei state capital, she fled to Mingkaman with her family, leaving her job and relatives behind.

“When the crisis came I ran, by foot, from Bor to my village 40 kilometres away. My family decided we would go to Mingkaman for safety, so we walked to the river and crossed by boat,” she said.

To meet the humanitarian information needs of displaced South Sudanese, Internews set up Mingkaman 100 FM. The radio station’s logo is a barge, a flat-bottomed boat used to ship cargo along the Nile River. But in this case it symbolizes the connection of Bor, Jonglei state to Mingkaman, Lakes state across the river.

“Rivers and boats bring news and information, so does Mingkaman 100 FM,” said Nigel Ballard, Internews project director for The Radio Community, a network of six radio stations in South Sudan. 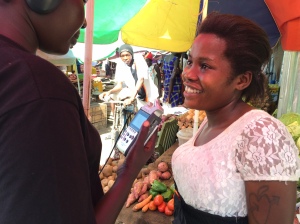 Kuol, 23, was born and raised in Bor town. His family returned from Mingkaman to Bor in December 2014, hearing that peace had been restored. Kuol waited to return since he was working as a child protection officer for Save the Children in Mingkaman.

“In South Sudan literacy is so low. The country has been at war for so many years,” Kuol said. “I want to educate the community to send their children to school. This will help South Sudan develop.”

Kuol is Mingkaman FM’s education reporter in Bor. He believes it’s the only tool worth investing in. That’s why he left his job in Mingkaman and returned to Bor. Over 70 percent of South Sudanese cannot read or write. This is one of the highest rates of illiteracy in the world.

Radio can play a huge role in supporting a community’s education initiatives. Mingkaman 100 FM plays a critical role in educating the community on a range of issues including peace building, connecting displaced or lost family members, even where to locate services offered by humanitarian agencies.

Internews TRC Network Managing Editor, Chris Marol, went to Mingkaman in 2014 to see the humanitarian situation caused by the conflict. He saw a village turned into a bustling town, overflowing with displaced South Sudanese.

Marol knew immediately that Mingkaman would benefit from a radio station. He now sees Mingkaman FM serving the wider community by hiring new staff to report on Bor.

“Giving information on socio-economic issues, peace talks and peace dialogue can [allow] the community [to] build a peaceful coexistence,” Marol said. “Having radio where a community of listeners can discuss issues that matter to them most is another way of keeping people informed.”

Ateng exits the hospital and begins to walk back to the Mingkaman FM bureau office located near Bor town’s lively market. Traders have already returned to Bor to resume business.

“I need to stop by the market to check commodity prices. Many people are unable to afford basic food items due to the economic situation in the country. I need to cover this story for Mingkaman FM,” she said.