Home › Print › Mingkaman Together: A radio special to ease tension in the community

Mingkaman Together: A radio special to ease tension in the community 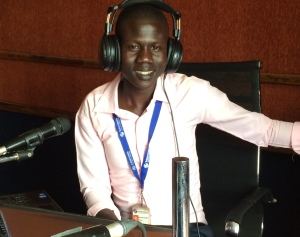 The volume of the song reduces slowly over the radio. The voice of Mingkaman 100 FM host Majok Guet comes in: “Welcome to Mingkaman Together, a special program to ease community tension.”

Sept. 7, 2015, protesters claiming to be the original inhabitants of Awerial County were demanding jobs. The young men were upset that humanitarian agencies had South Sudanese working for them who come from neighbouring states and counties. They demanded a quota system to guarantee more jobs for locals.

The protesters stormed the gate at Mingkaman’s humanitarian hub, where Mingkaman 100 FM is based. The radio station manager, Joseph Ngor Deng, was attacked by the protesters.

“I was sitting at my desk when between 10 and 15 people came in and carried me outside the office,” Ngor Deng said. “They took the belt off my pants and began punching and kicking me.”

“I was forced out of the studio and beaten with a stick,” Kur said. “I received bruises and had to go to see a doctor. He prescribed me pain medication.”

Kur, Ajoh and Ngor Deng are now feeling much better. In response to what happened the team at Mingkaman 100 FM knew they had a role to diffuse the conflict. This meant involving all sections of the community to look at what happened, establish the facts and then resolve matters in a peaceful manner. Importantly, they recognized they were not the story and had to remain as independent journalists.

They came up with the idea for a program called Mingkaman Together. Throughout town, radios are heard in almost every home and shop.

Guet’s voice comes through the speakers at Mingkaman’s bustling market: “Internally displaced people are South Sudanese who fled violence during the December 2013 conflict. The displaced people living in Mingkaman come from Duk, Twic East and Bor counties in Jonglei State.”

In January 2014, Mingkaman was a small village. Following the outbreak of violence in Jonglei state, 70,000 South Sudanese crossed the White Nile, one of the two main tributaries of the Nile River, into Lakes state.

Today, Mingkaman is a bustling town with markets, roads, community centres, health facilities, a new port and bank. Guet continues: “With the arrival of IDPs, humanitarian agencies have contributed to this development.”

According to protesters, the main reason behind the Sept. 7 attack on Mingkaman’s humanitarian hub and radio station, was because they fear displaced South Sudanese living in Mingkaman are receiving preferential treatment when it came to obtaining work.

Protest leader, Wuol Abiar Wuol, apologized on-air for the assault on Mingkaman 100 FM staff. He went on to apologize to the community and humanitarian agencies for using violence to try to gain more jobs for those claiming to be “host community.”

The program’s host Guet then addressed the lingering questions posed by his listeners: “Who belongs to the host community? Is it those who have lived their entire life in Mingkaman? Or only those living here before the 2013 conflict – when IDPs started to arrive?”

These are not easy answers to find. Guet hopped on a motorbike and drove from the radio station to Mingkaman town centre. He approached men and women, old and young.

What he heard next surprised him. It turns out information from the humanitarian agencies is slim to none these days in Mingkaman. This is a drastic change from 2014, when IDPs settled into the sleepy village turned regional hub.

Nuol Gak Ajak, 52, is a father of seven who listens to Mingkaman 100 FM. He told Guet that more radio programs with targeted information from agencies is needed.

“This program brought us together. Mingkaman FM is the only source of information we have now,” Ajak said.

Rhoda Nyanyeth, 23, is a mother of two. She also listens to Mingkaman 100 FM.

“This program showed us that we must live together in a peaceful way. We must open our doors to interact with everyone around.”

Guet’s voice comes back in to sign off from the radio special Mingkaman Together. The sound of a strumming guitar comes over the radio speakers. Mer Ayang’s soulful voice returns: “I’m Warrap, Upper Nile, Jonglei, all the states. People please don’t you see, I’m a South Sudanese.”

*Due to feedback received from the community, Mingkaman Together is now a regular monthly program, creating a conversation between humanitarian agencies and the community, only on Mingkaman 100 FM.