JUBA, South Sudan – Riak Akech wakes up to the sound of the muezzin call to prayer for all Muslims. She’s a Christian, but uses the call as an alarm clock in her small tukul, or hut, which she shares with her aunt and younger cousin. It’s constructed of bamboo and plastic sheets with a UN agency logo imprinted on it.

Akech, 19, lives in Mahad, a settlement of nearly 3,000 displaced South Sudanese coming from restive Jonglei state. Akech steps out at dawn with a bucket in hand to retrieve water from Mahad’s reservoir. Three shirtless children greet her as “teacher,” a title reserved for only those local youth trust.

“I’m happy that the kids respect me. I teach them not to get in trouble,” Akech said.

She’s not your typical teacher, as she hasn’t even finished primary school. But Akech has volunteered her time to work at Mahad’s child friendly space, teaching the youth the value of education.

“I enjoy spending time with the children,” Akech said. “I lived in [Kenya’s] Kakuma refugee camp until 2003, so I know how important it is to help young people living in this situation.”

If a child is sick in Mahad, and the mother can’t communicate in English or Arabic, Akech accompanies the family to the hospital and speaks to medical staff on her behalf. Akech speaks English, Arabic, Dinka and even some Murle.

Most people settled at Mahad, the Dinka, Anuak and Murle ethnic groups, come from different parts of multiethnic Jonglei. All are living in close proximity, on a small plot of land surrounding an Islamic primary school.

Two years ago, a conflict between South Sudan’s president, Salva Kiir, and his former deputy, Riak Machar, set off an ethnic killing spree in the capital Juba. The presidential guards, mainly from the Dinka ethnic group, turned against those from the Nuer ethnic group, said to be protecting Machar. This violence quickly spread to state capitals Bor, Malakal and Bentiu.

Sandy Riak and her friend listening to the messages on the child-friendly space’s Freeplay radio.

In early 2014, Internews set up a humanitarian information service called Boda Boda Talk Talk at the UN base in Juba, as well as a radio station in Mingkaman, Lakes state, where 100,000 IDPs arrived fleeing the conflict in Bor. Mingkaman 100 FM is a community radio station that now serves the wider region of eastern Lakes and western Jonglei states, providing not only humanitarian information but a wide range of news and current events programs.

17-year-old Mahad resident Sandy Riak comes from Bor. She wants to become a doctor, so she can help people by providing health care to those who need it most.

“Those in Bor, Jonglei state. God bless you. I want to join you. I’m greeting you my friends. I miss you my family,” Sandy Riak said in her first message from Mahad, recorded last July.

This message to family and friends in Bor gave Internews the idea to turn its work at Mahad from providing humanitarian information audio programs, a lifestyle series called My Mahad, into a radio service sending messages to loved ones in hopes to reunify families.

“The majority of people living at Mahad don’t have access to mobile phones or radios,” Akech said. “The main way people in Mahad receive information is by word of mouth.”

Akech was trained last June by Internews journalism trainer Adam Bemma on how to use an audio recorder and to interview Mahad residents. This led to six episodes of My Mahad being recorded in the community and aired, via SD card, to women and children on four Freeplay radios.

One wind-up, solar-powered, radio was given to each community leader in Mahad (Dinka, Anuak and Murle) including one for the children at the child friendly space.

“It is important to talk about peace in our community. We all need to teach our children about the importance of peace. If we are to have real peace, we must begin with children,” Sandy Riak said in her latest message from Mahad.

Messages from Mahad continues where My Mahad left off. It’s being aired every Saturday and Sunday on Mingkaman 100 FM. A new radio mast at Mingkaman 100 FM means its broadcasts reach from Lakes state across the Nile River deep into Jonglei state. 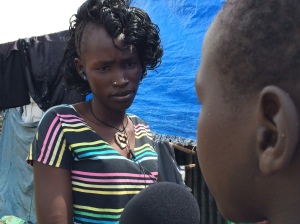 “I am in Mahad. I come from Bor. The fighting happened 24 December 2013 while I was there,” 12-year-old Akoi Mayen Kur said in his first message to family and friends. “We want to join our hands for peace. We are one nation and one people. We miss our home.”

Akech carries the audio recorder with her every day in Mahad. Displaced residents ask her to stop and record their messages for lost family members, hoping they will hear it and be reunited some day.

“People ask to hear their voices once I’ve recorded them, so I play it back. It makes them smile. Children laugh,” Akech said.

*Messages from Mahad began to air on Mingkaman 100 FM in November 2015. It aims to reunite families, via radio messaging, from Lakes and Jonglei states displaced by violence in South Sudan.