Four Mingkaman residents, out of of a group of 12 youth trained on radio and photography by Internews, sat across the table from Ngor in the radio studio.

Rebecca Yar, 18, is in her final year at Mingkaman One primary school. This is her very first time on the radio. At first she seemed a bit nervous, but once handed the microphone, Yar spoke from the heart.

“Many families don’t want their girls to go to school. I had to push hard for my father to send me. I’m not sure if I’ll be able to continue with my studies next year,” she said.

Despite promises from local authorities, no secondary school has been built in Awerial County, with a population of over 70,000. The closest secondary school is over 70 kilometers away in Yirol, Lakes state or across the Nile River in Bor, Jonglei state. 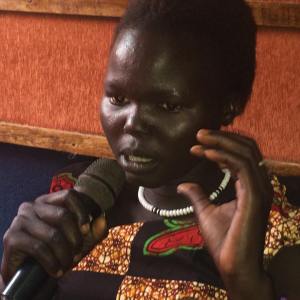 Rebecca Yar is an 18-year-old primary school student. She’s a member of the Mingkaman Young Reporters.

Access to education is an issue all youth in Mingkaman agree must improve. Isaiah Anguat, 22, comes from Awerial County. He still hasn’t completed secondary school.

“There has been a lot of development in Mingkaman. We have roads, health clinics, a bank, a port, and 10 primary schools,” he said. “But we need a secondary school, so I can finish my education and find a job.”

A lack of employment opportunities led to a protest in September 2015. Youth from Awerial County stormed the gates of Mingkaman’s humanitarian hub demanding jobs from aid agencies.

Mingkaman 100 FM became the target of this protest and resulting violence. Youth from the host community of Awerial County claimed IDP youth, originating from Bor County but displaced due to the December 2013 conflict, were being offered more job opportunities.

James Garang, 26, remembers this outburst of violence. He says there was a trend that started in 2014 with violence between host and IDP youth over land and cattle.

“We must advise youth that there are other ways to deal with problems rather than fighting,” Garang said. “If community and youth leaders meet to discuss the underlying issues it will not lead to violence.”

Garang and Yar mentioned the importance of community reconciliation, via the radio airwaves, during the Mingkaman Young Reporters program.

“Reconciliation means for people to live in peace. We will avoid fighting, forgive, and live as brother and sister in one nation,” said Yar.

Daniel Gai, 43, is a father of six children and the oldest member of Mingkaman Young Reporters team. He’s originally from Bor County. Two of Gai’s kids are enrolled in Mingkaman primary schools.

“I’m not ready to return to Bor. If I take my children back home, I fear cattle raiders may come and kidnap them,” he said. “It’s better to keep my children here, safe and in school.” 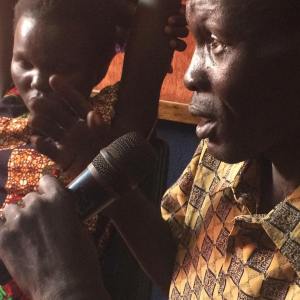 Daniel Gai is a 43-year-old father of six and member of Mingkaman Young Reporters.

Insecurity is the main reason most displaced people from Bor, Jonglei state have yet to return home in large numbers. Mingkaman has grown from a village to a regional trading center since 2014. Humanitarian agencies have supported, and helped finance, this growth.

Internews set up Mingkaman 100 FM to help agencies reach displaced people with critical humanitarian information. It has also grown, and its signal now reaches the wider region of Eastern Lakes and Jonglei states.

“When there is violence, it’s good to use the radio to stop it before it spreads,” said Anguat.

“We are trying to unite the youth in Mingkaman, so they can understand the importance of life,” he said. “Their [Mingkaman Young Reporters] message was to live together, not as host or IDP, but as one community.”

Meta
@adambemma
Snapshots of #Bangkok. I passed this radio station on my way to a meeting with RECOFTC, The Center For People and Forests on the Kasetsart University campus. It reminded me of my days working with Farm Radio International in Arusha, Tanzania. It’s great to see agriculture-themed radio in Thailand, especially as I’m working on stories about climate change mitigation and adaptation in Southeast Asia.
Blogroll
Recent Posts
Recent Comments
%d bloggers like this: