Experts fear a return of the kind of desperation that fed the 2015 boat crisis as the storms hit Bangladesh’s coast.

BANGKOK, Thailand – Torrential rains along the Myanmar-Bangladesh border are threatening to make an already grim situation for the nearly 700,000 Rohingya refugees who fled genocidal violence back home even worse as the monsoon storms hit the overcrowded, makeshift camps.

Now, regional governments and human rights groups are bracing for an influx of new refugee boats as Rohingya flee rapidly deteriorating conditions in coastal camps and continued danger back in Rakhine State.

“I can say that in a very short time more Rohingya boats will come [to Thailand],” said Haji Ismael, the director of Rohingya Peace Network of Thailand. “What is our future? It’s hopeless.”

In late April, 76 Rohingya Muslims arrived in Aceh, in northern Sumatra, on a boat that was set adrift for nine days after it left Myanmar. Earlier that same month, five Rohingya refugees were rescued at sea by Indonesian fishermen in East Aceh, although it’s unknown if they set sail from Myanmar, Bangladesh, or elsewhere in the region.

Another boat, this one carrying 56 Rohingya refugees, most of them women and children, also docked at the Thai island of Koh Lanta in early May. There, the refugees were given food, water, and fuel before being told to continue on toward Malaysia, their intended destination, according to Thai authorities.

Despite sharing a land border and maritime boundary with Myanmar, Thailand doesn’t officially recognize the rights of asylum seekers and refugees. The country is not a signatory to the UN Refugee Convention, but refugee camps along its border with Myanmar have existed for more than 30 years.

The Thai government still refuses to allow boats to enter Thailand and orders its navy to push boats back to sea, even as neighboring countries like Malaysia and Indonesia have taken some refugees in since the 2015 Andaman Sea boat crisis. Thai authorities now provide what they call “humanitarian consideration” to boats at sea, hoping to persuade them to continue their journey to elsewhere.

“While Thailand is not a signatory to the refugee convention, they are still bound to the duty to rescue persons in distress at sea [that] is enshrined in international maritime law,” said Lilianne Fan, an expert on Myanmar and director of Geutanyoe Foundation, an Aceh-based group dedicated to helping rescue refugees at sea. 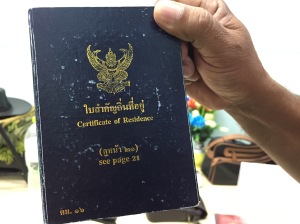 Ismael shows his Thai certificate of residence. He has lived in Thailand for 24 years

Thailand has defended its resistance to accept refugees into the country by claiming that the boats carrying Rohingya Muslims are destined for Malaysia, though Prime Minister Prayuth Chan-ocha told the press in 2017 that Thailand was ready to “receive various displaced people” and “send them back when they’re ready.”

“Thailand should help these people,” said Puttanee Kangkun, a Thai human rights specialist at the nonprofit Fortify Rights. “We don’t know what they face at sea or if they can make it to their destination safely. They have to be treated and interviewed to see whether they have come voluntarily or not. We must investigate what’s going on. It’s not [right] to give food and push them away.”

About 5,000 Rohingya currently live in Thailand permanently but half of them are undocumented, or living illegally, according to estimates by Haji Ismael. This makes advocacy by Rohingya in Thailand on behalf of new Rohingya arrivals, by land or sea, difficult. Today, undocumented Rohingya refugees in Thailand are treated like all other immigrants subject to arrest and deportation, not as asylum seekers and refugees in need of protection.

Thailand signed the ASEAN Convention Against Trafficking in Persons, especially women and children in November 2015. This means it is obliged by this convention to help victims of human trafficking. If the Rohingya Muslims declare they have been trafficked to Thailand, their only option is to live in government-run shelters rather than the immigration detention centers they would be sent to otherwise.

“It is critical that ASEAN takes steps to develop a dedicated policy for refugee protection that includes rescue at sea, admission to territory, safe reception, access to humanitarian assistance, and alternatives to detention,” Fan told VICE.

And while the international attention remains on the plight of Rohingya refugees in Bangladesh, rights groups say not enough is being done to help Rohingya Muslims remaining in Myanmar, who are also facing the risks of extreme weather and continued violence.

“With the monsoon season fast approaching, there has been a race against time for Rohingya to escape Rakhine,” Fan explained. “There’s an entire population of displaced people in Rakhine state with no solution to their situation.”