Shih Ming-te holds up a “most wanted” poster featuring him as a young man on the run from law enforcement in 1979.

TAIPEI – December 10th is celebrated as International Human Rights Day. But in Taiwan the event takes on a more somber tone as the day to commemorate the 1979 Formosa, or Kaohsiung Incident.

This was a defining moment in Taiwan’s history – then under Chinese Nationalist (KMT) rule and its “White Terror” martial law from 1949 to 1987.

Shih, 77, is set to release his new book To Be Able To See The Sun Tomorrow at Taipei’s Sheraton Hotel – site of a former military prison – 39 years later to pay homage to his fellow political prisoners who paid the ultimate sacrifice for democracy.

“The reason I chose December 10, [international] human rights day, is to tell the Taiwanese all the freedom you’re enjoying today is because of these men whom you’ve forgotten,” he said.

All members of Shih’s “party without a name” were arrested in Kaohsiung. They were demanding an end to martial law, the ban on political parties, and the “10,000-year” parliamentary rule of the KMT’s Chiang Ching-kuo (son of Chiang Kai-shek).

Shih fled Kaohsiung but was captured and arrested by police not long afterward.

“I knew I would face the death penalty,” he said. “Prison is where you learn how to fight difficulties, to fight an oppressive regime.”

Due to international attention on Shih’s case, he was sentenced but served only 10 years and was released from prison in 1990. In total he spent 25 years of his life behind bars.

At the age of 49, he was already one of Taiwan’s most prolific writers and political activists. He went on to lead A Million Voices Against Corruption in 2006 to oust then-President Chen Shui-bian, Taiwan’s first non-KMT president.

“I’m now relieved and also proud seeing how democracy has come together on this island of Taiwan. I was a kid who was born under dictatorship. I’m proud of what Taiwanese democracy has accomplished,” he said. 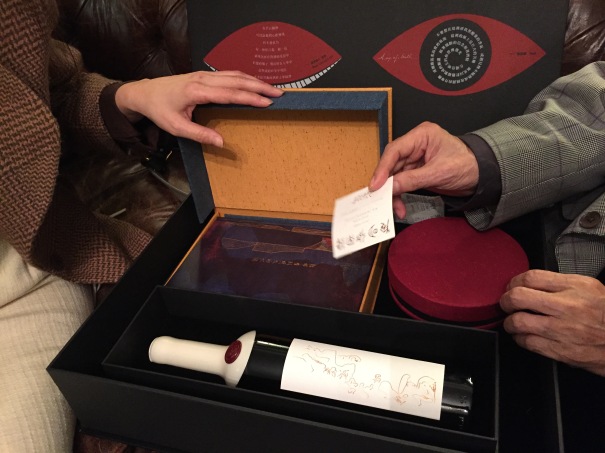 Shih Ming-te’s new book To be Able to See the Sun Tomorrow will be available Dec. 10, 2018

Shih has self-published over a dozens books and memoirs. But his latest is not like the others. This one is a limited edition, dedicated to his brother who died on hunger strike, protesting Shih’s treatment in prison.

“This book is not about me. It’s about the people in jail with me sentenced to death. I’m paying respect to those martyrs. They died unjustly,” he said.

The first chapter is called One Bottle of Prison Wine. The gift box contains the book and a bottle of red wine.

“We should pay honor to these people. This is the highest quality on the market. Every chapter will have artwork to complement the Chinese characters,” he said.

Shih plans to announce Dec. 10, 2018 that he has located a former military execution site in Taipei New City where many political prisoners were killed. He will ask the government for permission to build a human rights memorial wall there for victims of the KMT’s White Terror.

“I’m not asking for money, just the land,” he said. “This is what I should do for my brother who died [defending democracy].”