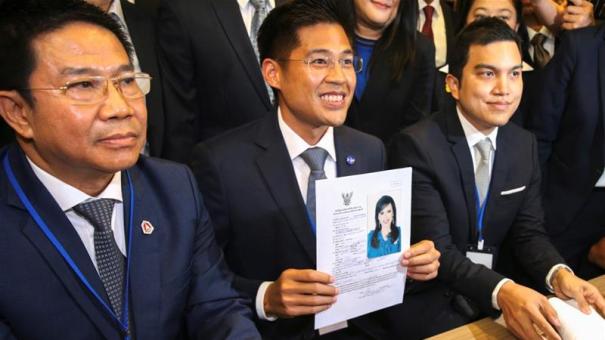 Bangkok, Thailand – With Thailand’s long-delayed elections just over a month away, a court ruling is expected to deal a major blow to parties loyal to ousted ex-Prime Minister Thaksin Shinawatra and tip the scales in favour of the country’s military government – even as many voters appear weary of the generals after five years of army rule.

The Constitutional Court on Wednesday is expected to dissolve Thai Raksa Chart following the party’s shock but failed nomination of Princess Ubolratana – the king’s older sister – as its candidate for prime minister in the March 24 polls.

Pheu Thai, the main pro-Thaksin party, may also later find itself be guilty by association, according to political analyst Supalak Ganjanakhundee, managing editor at The Nation.

“It may not be too difficult to link the two parties together. Some members of Thai Raska Chart came from the Pheu Thai party,” he said. “I anticipate the military will find some measure to block Pheu Thai [before the election] because it’s seen as a threat.”

Two weeks ago, Thai Raksa Chart stunned Thailand when it put forward Princess Ubolratana, who became a commoner after marrying a US citizen in 1972, as its candidate for prime minister.

Although Ubolratana returned to Thailand after getting a divorce, and is now known as a TV star and actress, the monarchy is said to be above politics and is protected by strictly enforced laws on lese-majeste.

Thailand’s Election Commission swiftly disqualified her candidacy, saying the nomination was unconstitutional and hostile towards the monarchy. The move came after King Vajiralongkorn said it was “improper and highly inappropriate” for a royal family member to delve into fractious Thai politics.

Meanwhile this week, Thai police said they were also seeking the prosecution of Thanathorn Juangroongruangkit, the leader of Future Forward – a party pitched at younger voters making its electoral debut next month – over a speech shared online in June last year criticising the military.

But two of the 19 coups that have taken place since the country became a constitutional monarchy in 1932, have replaced pro-Thaksin governments.

Pheu Thai won the last elections in 2011 but was usurped by a coup three years later when the current military government – the National Council for Peace and Order (NCPO) – seized power from Yingluck Shinawatra, the sister of Thaksin.

Thai Rak Thai Party, Pheu Thai’s predecessor, was dissolved in 2007 following the ousting of Thaksin himself in a coup a year earlier. The party’s next incarnation, Palang Prachachon, was dissolved by the court in 2008.

“We don’t know whether we’ll be able to make it to the polls or not,” said Umesh Pandey, member of the Thai Raksa Chart party.

“We are fighting against a regime that seized power five years ago. They have total control of how things are run.”

After taking control of the country and tightening the military’s hold over politics, General Prayuth Chan-ocha is now trying to also become an elected prime minister through the Phalang Pracharat Party.

The 2017 military-drafted constitution almost assures the generals continued control of the National Assembly.

The military will appoint a panel to select all 250 members of the upper house so only 126 elected members would need to support Prayuth as prime minister and extend the military’s hold on power.

Overall, there are 77 political parties that have registered for the polls.

The two oldest are the Democrat and Mahachon parties, but most are newcomers – like Future Forward – hoping to appeal to voters no longer interested in the divisive colour-coded politics of the past.

Future Forward’s orange triangular logo is said to be the result of mixing yellow-shirt royalists and red-shirt Thaksin supporters. Its leader, Thanathorn, a successful business tycoon, has been likened to Thaksin.

“Our main policy is to amend the constitution,” said Sirikanya Tansakun, policy director at Future Forward. “We want military reform to stop this endless cycle of military coups and disruptions in governance.”

They are all vying for the backing of nearly seven million first-time voters to put an end to one of Thailand’s longest periods of army rule, pledging to reverse the military government’s policies.

The 22-year-old made headlines in 2016 after a public spat with Prayuth over his refusal to kowtow along with other university students before a statue of King Rama V.

“I will go campaigning to get more people to vote,” he told Al Jazeera.

“I support the democratic camp. I think young people are definitely going to vote and kick out the NCPO.”