The Conscientious Objectors of Thailand

BANGKOK — Every April, Thailand begins its annual draft lottery to conscript Thai males, aged 21 and above, into military service. The young men line up to draw slips of paper; a red slip means one has to serve for two years, while a black indicates an exemption. Those who proactively volunteer will be spared this ritual, and will only be required to complete a six-month service.

Although Thailand’s 1954 Military Service Act states that all Thai males are required to serve in the military at the age of 21, there are exceptions to this rule. Methods of draft-dodging have triggered accusations of privilege and unfairness, and some have begun to argue that conscription should either be drastically cut down, or maybe even abolished completely.

A duty to nation, religion, and King

According to a recent survey, it’s believed that many Thais still feel obliged to serve in the military as their duty to nation, religion, and King. Military slogans are displayed in school textbooks. Soldiers are often portrayed positively in television and cinema.

But this deeply conservative institution is seeing challenges as the political scene shifts and evolves. For the first time, several political parties that contested the election in March campaigned to end military conscription.

“Our main purpose is to make the army as small as possible while still keeping them running effectively and efficiently. We compared with the neighbouring armies and we find that the Thai army is the largest compared to others,” says Sunisa Diwakorndamrong, a former officer in the Royal Thai Armed forces and secretary of Pheu Thai Party’s military reform committee.

In a context where the Thai military has seized power in 12 coup d’états since the beginning of constitutional monarchy in 1932, opposing conscription is far from an apolitical move. Ahead of the election, General Prayuth Chan-ocha—who’d served as prime minister in the military junta’s government—shed his stripes to stand for election under the banner of the Phalang Pracharath Party. The party went on to win the popular vote, and Prayuth now remains prime minister. It’s thus in the interest of other parties to call for reforms that might check the military’s might.

One example is the Pheu Thai Party—backed by the exiled-yet-influential former prime minister Thaksin Shinawatra—which had won the most constituency seats in the 2019 election.

“The underpinning concept of Pheu Thai Party’s military reform policy is that the Thai armed forces should be resized,” says Sunisa.

This is unlikely to happen anytime soon; the new Thai government is still led by military junta members elected to the lower house, while 250 senators in the upper house were handpicked by the junta under their 2017 Constitution. But proposals such as those raised by the Pheu Thai Party mean that the issue of conscription is now up for debate in the public sphere.

Thailand has roughly 440,000 military personnel. Compared to European countries of similar population size, such as the UK and France, Thailand’s military seems disproportionately large, especially since its only threat is an insurgency in the “deep south” states of Pattani, Yala and Narathiwat. According to Global Firepower’s 2019 Military Strength Ranking, Thailand ranked 26th in the world.

Sunisa wants conscripts to be replaced by volunteers. As Thai women aren’t conscripted, she herself volunteered to join the military and spent 10 years in service, reaching the rank of lieutenant before retiring and joining the Pheu Thai Party.

“At present, the Thai armed forces recruit around 104,000 conscripts each year. If the size declines by 50%, the desired number of conscripts will match the number of those voluntarily applying to serve the army annually,” Sunisa says.

As it is, there are already different ways to dodge the draft. There’s drawing a black slip in the lottery, of course, but there are other possibilities.

If you’re still in school you can delay conscription until you’ve completed your studies, up until the age of 26. Then you must serve or face possible jail time.

A deferment is possible if you join the monkhood as a novice but an exemption will only be granted if you actually become a member of the Buddhist clergy. It’s believed, according to the paper The military draft in Thailand: a critique from a nonkilling global political science perspective, that many Thai males have sought refuge in the monkhood to escape the military.

Being rich helps, too. According to the researchers of The military draft in Thailand, estimates suggest that there have been 30,000 Thai draft avoiders, mostly the sons of wealthy families.

According to CJ Hinke, one of the paper’s authors, Thailand’s elite have been exploiting loopholes to evade conscription since it first began in the 1700s. A common practice is to bribe an officer to take a young man’s name off the conscription list and replace it with another’s name. This is illegal—but it happens.

This practice has drawn flak. “It’s corrupt, so I have to protest it,” says student leader Netiwit Chotiphatphaisal. “If I can pay under the table—my father and many people also did this in the past—it’s corruption.”

For the last three years, the 23-year-old Netiwit has delayed his conscription. He’s the author of I Can Love My Country Without Having to be Drafted, an 88-page manifesto published by the same publisher who has printed works by Chinese dissident writer Liu Xiaobo and Timothy Snyder’s tract against authoritarianism, On Tyranny, in Thai.

“It’s an overview of [Thailand’s] history of conscription,” Netiwit says of his book. “It comes from a critical feminist and non-violent perspective.”

Netiwit documents the history of compulsory military service in Thailand beginning with the 1905 Military Conscription Act. This edict was meant to match Thailand’s military might with those of western nations. The compulsory system only ended in 1954 with the introduction of the draft lottery. 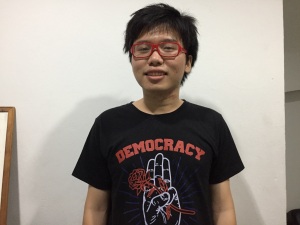 Over the last two years, Netiwit has challenged more than Thailand’s military tradition. As Chulalongkorn student council president, he refused to kowtow in front of the King Rama V statue. This led to his removal from council and a public spat with Prime Minister Prayuth.

Following the election results—unfavourable to Thailand’s pro-democracy camp—Netiwit is now focusing his attention on overturning military conscription. He hopes this will help “de-militarise” Thai society.

“I will go to jail when I turn 26 because I refuse to be conscripted. I realise this country has become like a jail, especially for poor people who don’t have an opportunity to run away [from military service],” Netiwit tells New Naratif.

“Many in this government are former military officers and favour conscription. I must do something [about this].”

Netiwit is one of only two declared Thai conscientious objectors—individuals refusing to perform military service due to freedom of thought, conscience, or religion. Inside Thailand, he’s the only voice publicly objecting to military conscription.

Puey Ungphakorn, a Thai economist and former Governor of the Bank of Thailand, first tabled the option of conscientious objection in Thailand’s parliament in 1974. He also proposed a non-military service to replace conscription. Both were rejected.

Thailand is a signatory to the UN International Covenant on Civil and Political Rights (ICCPR). The right to freedom of thought, conscience and religion or belief is outlined in it. But it does not refer to conscientious objection as a right.

In 2002, Thailand abstained from a vote in the UN Security Council on the issue and signed a joint letter stating it was “rejecting the universal applicability of conscientious objection to military service.” According to Amnesty International, Thailand is one of 30 UN member states that has mandatory military conscription but does not recognise conscientious objection.

Netiwit’s newest recruit to his anti-conscription movement is 16-year-old Rew Worachit. Rew is currently enrolled in the territorial defence curriculum. It’s a programme that offers an alternative to conscription, since those who complete it are exempt from the draft at 21. But it involves field and weapons training and takes five years to complete—three of which are spent in the Reserve Officer Training Corps.

“I’m studying the military programme in school. I don’t have to be conscripted. This is an alternative for students who can’t reach a [post-secondary] level education,” Rew says.

Netiwit doesn’t support this programme and views it as an attempt at providing a career path in the military to Thai teenagers without the fear of conscription.

Since Puey Ungphakorn’s failed attempts in parliament, no concrete steps have been taken by legislators to reform the conscription system, either to reduce the number drafted or to introduce other forms of national service beyond military duty. But Thai academics have been discussing alternatives.

Conscript deaths have also prompted further reflection. After Private Noppadol Worakitpan’s collapse from cardiovascular failure prompted a police investigation in 2017, Siwach Sripokangkul and John Draper, researchers on Thailand’s military at Khon Kaen University, co-wrote an op-ed in the Bangkok Post calling for conscription to be changed to explore non-military avenues of serving one’s country. They argued that a “universal national service would revolutionise the economy. It also promotes a civilian government which stands above the military, a fundamental principle for eventually demilitarising Thailand and consolidating Thai democracy.”

The May 2019 death of a 22-year-old volunteer serving in the Royal Thai Armed Forces headquarters in Bangkok has also made Sunisa more vocal about ending conscription. According to reports, a military panel has been set up to investigate the death. But Sunisa believes that, as in the past, the military will not provide answers to the family of the deceased conscript, as they cite deaths as internal matters.

“It’s hard to say whether the problem is common or not, but it’s happened several times and we have demanded investigations,” Sunisa says.

Netiwit has studied Puey Ungphakorn’s attempt 45 years ago to seek recognition of conscientious objectors and present an alternative to military conscription. “I think Thai people should serve their country. But you should have a choice how best to serve it,” Netiwit says, suggesting how a national service would be a better option.

But CJ Hinke disagrees with a Thai national service.

“I think that substituting alternative service for military makes it stronger. Just because you don’t have to serve in the military, in a historical context it doesn’t mean someone else doesn’t serve in your place.”

Hinke argues that it’ll only work if there’s recognition of conscientious objectors joined by an alternative service, followed by the abolition of conscription.

“The whole point to conscientious objection is conscience. Everyone draws a line in the sand at some point,” Hinke says.

“You’ve got to pick your fights and you’ve got to know which fights you can win,” Hinke adds, referring to Netiwit’s movement. “We can win this. We can end the draft in Thailand.”

Research on Thai military conscription by iLaw (link in Thai)