Three Burmese men wearing traditional blue longyis shackled at the waist and feet carefully step down, one after the other, from a police truck in Ayeyarwady Region – 84 kms from the commercial capital, Yangon.

The three are members of The Peacock Generation, a troupe of performers jailed in 2019 for mocking Myanmar’s military (along with three other members; Su Yadanar Myint, Kay Khine Tun and Zaw Lin Htut, also in prison).

“The military wants to censor and give a warning to the younger generation not to speak out against wrongdoings. It’s a threat to our freedom of expression,” said Thinzar Shunlei Yi, a 25-year-old spokesperson for The Peacock Generation.

All six were sentenced last year in Yangon for violating 505(a) of Myanmar’s penal code for performing thangyat, Myanmar’s traditional form of satirical street theatre, and 66(d) of the Telecommunications Law for broadcasting it to Facebook.

But they still face charges of criminal defamation for performing during last year’s Thingyan New Year festivities in Ayeyarwady Region.

“We [displayed] a picture of a bulldog in an army general’s uniform,” said Nyein Chan Soe, a 25-year-old member of The Peacock Generation arrested in 2019 but released after charges against him were dropped. 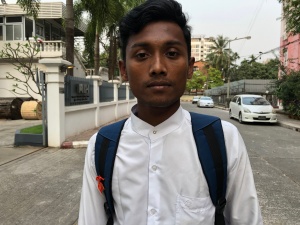 Nyein Chan Soe, 25, is a student actiivst and comedian who goes by the stage name of Chit Yone. He’s a member of The Peacock Generation, arrested in 2019 but released after charges against him were dropped.

In Myanmar, formerly known as Burma, the peacock is a symbol of resistance first adopted by student unions and independence leaders.

Then it became the logo of a movement fighting for a return to democracy during military rule from 1962 to 1988. This led to the establishment of the National League for Democracy that has a peacock on its flag.

Aung San Suu Kyi’s NLD party won a landslide election victory in 1990 but wasn’t allowed to take power until after Myanmar’s military junta allowed a second election – during its touted “roadmap to democracy” – in 2015.

From 1989 to 2013, the junta banned thangyat performances during the Thingyan New Year because the NLD had used it to raise awareness about the need for democratic change in Myanmar.

Students, artists and activists formed The Peacock Generation in 2014 to revive this form of traditional entertainment. The authorities began to monitor these annual street performances.

“The way thangyat is performed is a way to make [people] change their behavior. It’s not naming and shaming. It’s just a lovely way of telling the truth,” said Ma Thida, president of PEN Myanmar and former NLD party member. “It criticizes everybody not just the government [or military].”

Last April, President Win Myint released 24,900 prisoners in the government’s largest amnesty to date. But according to the Assistance Association for Political Prisoners (Burma) only 26 freed were political prisoners; 183 remain behind bars including the six members of The Peacock Generation.

International rights groups consider The Peacock Generation leaders in the fight for freedom of expression in Myanmar. For their efforts, they were awarded the 2020 E.U. Schuman Award.

Ma Thida believes they weren’t released in the amnesty because of the 2020 election expected this November. All six members of The Peacock Generation are noted political activists that could help mobilize the youth vote.

But recent accusations against Zayar Lwin and Paing Ye Thu have shown the jailed activists in a new light.

Local media reported the two had spread online hate speech towards the Rohingya in 2017. This came after the military’s brutal response to attacks by the Arakan Rohingya Salvation Army (ARSA) and resulting crackdown against Rohingya villages and murder of civilians in Rakhine state.

The UN said the military assault and unjust treatment of the Rohingya bear “the hallmarks of genocide.”

“In Myanmar, there is a difference between human rights defenders and political activists,” explained Thinzar Shunlei Yi. “These two are not the same.”

What she means is that political activists in Myanmar shouldn’t necessarily be recognized as human rights defenders, as is the case in other Southeast Asian countries.

Political activists in Myanmar may want the military to leave the political arena to the civilian leaders, but may still support the military in keeping the country secure against ethnic armed organizations (EAOs) operating in the borderlands.

Some of the Myanmar’s most celebrated democracy activists and politicians have been accused of making Islamophobic statements in the past. Many still refer to the Rohingya as “Bengali” which means they view them as immigrants from Bangladesh and not native to Myanmar.

Myanmar’s Rohingya Muslim community has been excluded from the country’s 135 recognized ethnic groups.

“In 2016, Aung San Suu Kyi issued an order to the media and [foreign] embassies not to use the word ‘Rohingya.’ This caused a lot of problems,” said Moe Thway, 39, president of Generation Wave youth movement.

“Now nearly one million Rohingya [have been] displaced and more than 10,000 were killed. Many lives were destroyed.”

In its 2020 World Press Freedom Index, Reporters Without Borders ranked Myanmar 139 out of 185 – a 20-point drop in four years.

According to Myanmar’s ATHAN – Freedom of Expression Activist Organization – a total of 1,051 people have been charged under laws restricting free speech since the NLD government came to power.

This year, Myanmar’s Thingyan New Year was cancelled because of concerns about the spread of Covid-19. There were no thangyat performances in 2020. But The Peacock Generation is hoping to return to the stage once released from prison.

They’ll have a lot of questions to answer about statements made in the past. But even though six are in jail, The Peacock Generation’s supporters have gone on to attack negative media coverage via the troupe’s Facebook page.

“The Peacock Generation’s spirit is strong. A prison sentence will not stop them from expressing their ideas and opinions. They’ve decided to raise their voice and fight for political reform,” said Nyein Chan Soe.