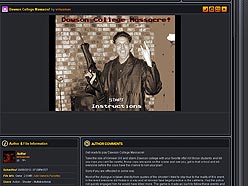 Free speech is the central component to a healthy democracy. In Montreal, it’s being attacked by many who want a video game taken off a website because it’s content may be “offensive” or “in poor taste.”

The creators of ‘Dawson College Massacre’ an online flash animation game that states in the introduction to “eliminate all the students, then kill any cops you can!” while using images of Kimveer Gill, may want to champion their rights under free speech in this country.

The game was posted online a few days before Sept.13, the fourth anniversary of the Dawson College shooting, when Gill walked into Dawson killing 18-year-old Anastasia De Sousa and injuring 20 others, before ending his life.

A representative from Dawson College’s student union contacted the Pennsylvania-based website newgrounds.com and three others hosting the material, asking them to take it down because “it’s very insensitive to members of Dawson.”

Montreal Police also plan to ask the internet provider to remove the content from their website, but they aren’t investigating the matter because there’s no criminal offence committed by the creators of ‘Dawson College Massacre.’

While the video game may be insensitive to Dawson students and those affected by Gill’s actions on that fateful day in 2006, it’s definitely not offensive. The victims in the shooting are not named or identified in the game, which means there’s no course of action under the criminal code’s hate speech legislation.

A similar game posted online in 2005, recreates the shootings that took place at Columbine High School in the U.S. ‘Super Columbine Massacre’ also caused a furor of controversy when it first appeared, giving gamers the opportunity to play Eric Harris and Dylan Klebold, while roaming the hallway and cafeteria, killing everyone that gets in the way.

Obviously, the only way to combat this gaming trend is to completely disregard it, which means don’t even give it the time of day. Besides ‘Dawson College Massacre’ has a look and feel that seems more like a weak attempt at stirring up controversy than actually intending to appeal to real gamers.

Free speech is a right that Canadians defend with all their might, so opening up this can of worms, saying that yes we defend free speech, but no we don’t agree it should be extended to people who recreate real life shootings because it’s offensive, is a real slippery slope.