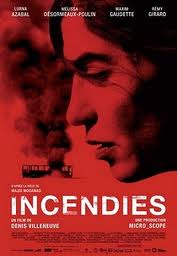 Canada’s entry to the 2011 Oscars couldn’t be a more poignant film. Denis Villenueve’s ‘Incendies’ is exactly what should represent Canadian and Quebecois cinema in the Best Foreign Language Film category at the 83rd edition of the Academy Awards, taking place this February.

Based on Wajdi Mouawad’s play, Villenueve’s ‘Incendies’ starts off with twins Simon and Jeanne grieving over the loss of their mother, Nawal Marwan (Belgian-Moroccan actress Lubna Azabal). Nawal’s friend and notary Jean Lebel (played by Quebec star Remy Girard) executes her will, sending her children on a mission to the Middle East to find their unknown brother, and thought-to-be-deceased father, and in the process delivering two sealed envelopes as she wished.

The story unfolds as Jeanne Marwan (Melissa Desormeaux-Poulin) returns to Nawal’s homeland, where she follows a trail and develops an understanding of her mother’s life. Then the film shifts back and forth from Jeanne, in the present, to Nawal, in the past, which is a bit confusing. But the intensity of the plot makes it a thought-provoking two-hour-and-ten minute tale of tragedy.

‘Incendies’ tackles many political hot topics in the Middle East. The backdrop for the film is a country in the midst of civil strife, where right-wing militias target civilians and refugees (reminiscent of the Lebanese Civil War from 1975-1990). And Nawal’s tale is one not often told in a cinematic style, but Villenueve is able to give this woman life and purpose on the screen, from her unwanted first child up to the point she gives birth to the twins while in prison.

Jeanne, the mathematician, views her mother’s complex life as an equation, where unlocking each piece of the puzzle reveals another shocking fact. Simon (Maxime Gaudette) on the other hand, looks at his mother’s posthumous request as a bizarre ride down a dead-end road, and at first he’s reluctant to help, until his sister Jeanne and family friend Jean, convinces him to put the last piece in place.

Villenueve’s previous film ‘Polytechnique’ garnered him accolades and awards (a Jutra and nine Genies) for his audacity to dramatize the story of Marc Lepine, the man responsible for the 1989 ‘Montreal Massacre’ that took the lives of fourteen women at the University of Montreal. But ‘Incendies’ is his crowning cinematic achievement, especially since it won over audiences at the Toronto International Film Festival, and was crowned ‘Best Canadian Film’ at this year’s TIFF.

Now Villenueve has the film industry’s attention and is already being lauded as Quebec’s, and Canada’s, premier filmmaker, which may pay off when it comes to Oscar season. Besides, the only other Canadian film to win the Oscar for best foreign film is Denys Arcand’s 2003 masterpiece ‘Les Invasions Barbares’. So it looks like he’s got big shoes to fill.