Tommorrow is the official start of the holiday shopping season, otherwise known as Black Friday. It’s a day where millions of American and Canadian shoppers head to retail stores to make purchases at rock-bottom prices.

Here in Canada, the idea caught on last year to follow the American tradition and have big box chain stores offer low prices in hopes to attract Canadian retailers to do the same.

So far, Black Friday has been adopted successfully north of the 49th parallel and is now growing to become one of the busiest shopping days of the year, after Boxing Day.

Canadians still head south early the morning that follows American Thanksgiving, which is known in the U.S. as an unofficial holiday, where prices are drastically reduced. However, for Canadians it’s mandatory to pay a duty tax to bring goods back over the border, which tends to deter most from continuing this tradition.

The history of Black Friday dates back to 1966, where in Philadelphia, Pennsylvania the local police department used the term to describe the Friday following Thanksgiving Day. The Philadelphia police said that it was a day when the downtown shopping centre became “over-crowded” and “mobbed” by people looking for deals.

The reason why it’s called Black Friday is because it takes place in the first quarter of the U.S fiscal year, which means it’s the first time retailers actually turn a profit and get out of the “black.” Here in Canada it occurs in the third fiscal quarter, so there’s reason to believe it doesn’t have as much of a financial impact on the economy.

Black Friday conjures up images of a dark day in the American and Canadian psyche, putting it in a negative context. In fact, every year U.S. television networks show up to retail stores early to meet those waiting in long line-ups for these deals. American television seems to glorify these gladiators in their arena of battle, or retail store, enduring an epic struggle to obtain the prize they seek: a cheap DVD player or video game console.

It’s actually reminiscent of that scene in Arnold Schwarzenegger’s classic holiday film ‘Jingle all the Way.’ The one where crazed shoppers are lined up waiting to get their children’s gifts, and once the doors open a flood of people enter the store, sometimes even using physical violence to ensure that they don’t leave empty-handed. 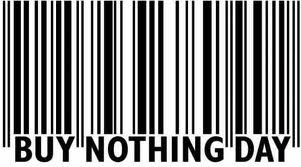 Back in 1992, a Vancouver, B.C. artist and activist Ted Dave began a countercultural holiday called ‘Buy Nothing Day’ as a way to challenge consumerism and make people rethink their spending habits. The event was promoted by Vancouver-based magazine Adbusters, which has since taken this movement global.

This year over 377 cities around the world are planning Buy Nothing Day events to coincide with Black Friday on Nov.26. These groups of local activists, or culture jammers, as they preferred to be called, plan and execute activities such as zombie walks through shopping malls, credit card cut-ups, as well as barter markets where goods can be exchanged instead of purchased.

In Montreal a few years ago, a group of activists actually hosted an event called ‘Steal Something Day,’ which hasn’t been adopted outright because of its extreme nature, but it’s interesting to see how far these activists are willing to go for this cause nonetheless.

While Black Friday is considered to most Americans as the “holy-day” (not holiday) of over-consumption and spending to commence the Christmas shopping season, here in Canada, this is a tradition we can do without.

So put away your wallets and purses, and hide your credit cards, Black Friday can be less black and full of colour if you spend the time with your family and loved ones instead of spending your money on them.