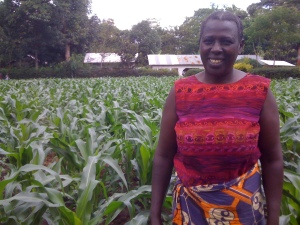 Grace Marko and her maize crop.

On the slopes of Mount Meru, Grace Marko feeds her cows by placing grass and water directly into their trough. This method of zero grazing, in which she keeps her livestock in an enclosed, shaded area, means her cows remain healthy, produce an abundance of milk, and do not overgraze her pastures.

There is an additional benefit. As Mrs. Marko explains, “I use the cow dung as fertilizer to grow maize, beans, vegetables and bananas.”

Northern Tanzania’s Arumeru district, in the foothills of Mount Meru, is very densely populated. This limits the amount of grazing land for livestock.

The forty-eight-year-old Mrs. Marko is married with four children. She’s known by other women in the village as bibi shamba, or wise woman farmer. She is also the treasurer of Ponjonda, a group of 35 women farmers from three district villages.

Flora Kitio is the local agricultural extension officer. She works with Mrs. Marko to share information with other women farmers on training, agricultural resources and inputs, and micro-loans.

Mrs. Marko says, “I took out a loan myself to purchase these cows and to pay my children’s school fees. I was able to pay it back by selling the milk.”

Mrs. Kitio works closely with women farmers in Arumeru. The fifty-one-year-old extension officer has seen a decline in the land devoted to coffee as a cash crop. In Meru culture, growing coffee was traditionally a man’s job. In recent years, vegetable farming has eclipsed coffee production, which has empowered Meru women to support their households themselves.

Mrs. Kitio says: “Maize, beans and bananas are our staple foods and have been farmed by women for ages. When coffee prices dropped, women turned to vegetables to sell because it can pay and improve their families’ livelihoods.”

Mrs. Marko travels to nearby Tengeru market twice a week to sell her maize, beans, bananas and milk. She says her vegetable crops boost her finances during the March to May rainy season.

However, Mrs. Marko adds, “This season, vegetable prices are fluctuating too much. I go Wednesday and I can sell Chinese cabbage for a good price, then on Saturdays the price has dropped. I’m not making enough money [for] this time of year.”

French anthropologist Catherine Baroin has studied Meru culture for 22 years. Ms. Baroin believes women farmers are as much a part of Meru culture as the mountain.

She says, “Everybody here is a farmer. Every family has a farm. Even if they work in [the city of] Arusha, they will have a family member tend to their crops.”

Better access to markets would help Tanzanian women farmers like Mrs. Marko. Irrigation is also a problem in the plains below Mt. Meru, where rain is not as plentiful as higher up the mountain.