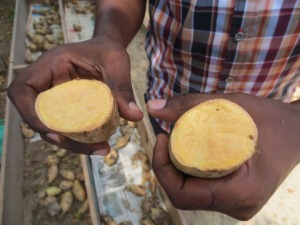 Sitting in traffic can be tedious. But 53-year-old businessman Loiruki Mollel uses the time to listen to the radio. He tunes in to Kilimo chetu [Our farming] on Radio Maria 89.1 FM as he manoeuvres his way through traffic in Dar es Salaam.

Mr. Mollel had read a newspaper story about the health benefits of the orange-fleshed sweet potato, or OFSP, and was intrigued. He remembers: “Not long afterward, I was listening to [Radio Maria] and heard a program with farmers talking about the lack of OFSP vines around Dar. I decided to get into agribusiness and produce OFSP myself.”

Orange-fleshed sweet potatoes are rich in beta carotene, a compound that the body converts to vitamin A. Also found in carrots, pumpkins and other orange-fleshed foods, vitamin A is important for human growth and development, and for maintaining the immune system and good vision.

Vitamin A deficiency can lead to slow bone development and stunted growth. According to the World Health Organization, a lack of dietary vitamin A causes between a quarter-and-a-half million children in developing countries to lose their sight every year.

Mr. Mollel became convinced that growing and eating OFSP would help small-scale farming families improve their health. He says, “I became very interested in … improving children’s nutrition. This, I believe, will be good for the economy and the country at large.”

He approached his friend Dickson Mhoro for help. Mr. Mhoro owns two hectares of land in Kigamboni, on the shores of the Indian Ocean.

Mr. Mhoro has plenty of experience in agriculture. He worked for the Tanzania Chamber of Commerce, Industry and Agriculture for eight years. The two men set up their business in 2013, focusing on growing OFSP.

Mr. Mhoro says: “We have two types of OFSP vines. The first is called Kabode and is very strong. The second is Mataya and produces many [sweet] potatoes. As for fertilizer, I’ve started using organic poultry manure, which seems to be working well this season. The OFSP needs three to four months to harvest.”

The two men have distributed their vines to farmers in and around Dar es Salaam and further afield.

David Nyirenda is a small-scale farmer from Tanga, a town about 350 kilometres north of Dar es Salaam. He heard about OFSP and travelled south to buy some vines from Mr. Mhoro. Now he multiplies the vines himself and supplies farmers in his region.

Mr. Nyirenda says, “We work together. For example, this season a few farmers in northern Tanzania were looking for vines and [Mr. Mhoro] put them in touch with me.”

Mr. Mollel, Mr. Mhoro and Mr. Nyirenda think that small-scale farmers in Tanzania need to be more aware of OFSP. Through educational programs like Radio Maria’s Kilimo Chetu, radio stations can inform the public of the health benefits of OFSP, and connect farmers to vine growers and markets where they can sell their nutritious harvest.

Mr. Mollel recently relocated from Dar es Salaam to Mtwara in southern Tanzania. He says: “We’re trying to expand our business and begin exporting to other countries where OFSP vines aren’t available … I see an opportunity to feed the world and benefit Tanzania economically.”