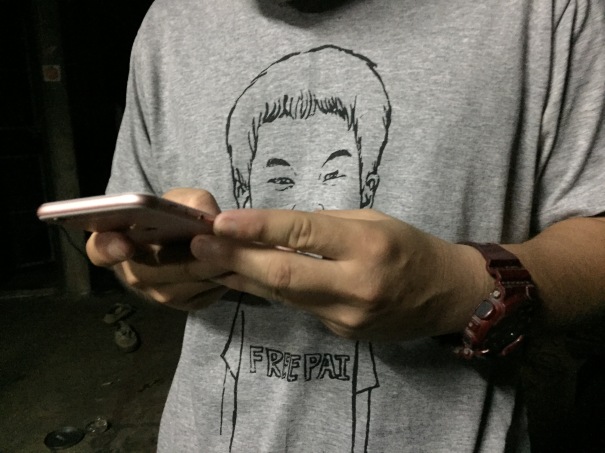 A member of Dao Din wears a t-shirt that reads: “Free Pai” in Khon Kaen

BANGKOK, Thailand – The sound of cicadas spread as the sun sets in the northeastern city of Khon Kaen.

Payu Boonsophon, 23, stares down at his smart phone. He hesitates before beginning to type a message on Facebook. He knows his online activity is being monitored by Thai authorities.

“We will meet outside of the courthouse,” he writes in Thai.

Seven members of Dao Din, a group of law students at Khon Kaen University, stand accused of contempt of court for staging a rally in support of “Pai Dao Din,” Jatupat Boonpattararaksa, outside of the local courthouse.

Boonpattararaksa was sentenced to prison in Khon Kaen last August. His crime was sharing a BBC Thai story online about the new king on his Facebook page.

The court found him guilty of violating both lese-majeste, or royal defamation, and the amended Computer Crime Act. He received a two-and-a-half year prison sentence.

During a visit to Khon Kaen by Thai Prime Minister Prayut Chan-o-cha, Boonpattararaksa became a target of the junta for wearing a t-shirt that read: ‘No to coup d’etat.’

“You can see that he developed his role in politics. With the attention that you have from the public, is also attention from authorities. His Facebook was monitored closely,” said Anon Chawalawan, documentation officer at iLaw, a legal watchdog in Bangkok.

Article 112 of Thailand’s criminal code states defaming any member of the royal family could land someone up to 15 years in prison.

Following the death of Thai King Bhumibol Adulyadej, the number of Thais charged with lese-majeste has risen. Since the 2014 coup the number of investigations has doubled compared to the past 12 years, states the UN.

Only four per cent of those charged with lese-majeste have been acquitted.

“There was a witch hunt. Some people made comments on Facebook regarding the death of the late king. Some were hunted down if they made a negative comment,” Chawalawan said. “They were forced to apologize to the king’s picture and taken to the police [station]. In some cases there was physical abuse.”

The junta amended the Computer Crime Act last year to take this draconian law online. Now anybody posting, sharing or liking something on social media can be charged with lese-majeste in Thailand.

“[The case of Pai Dao Din] is an example of how this law has been abused to undermine opponents of the government,” said Dr. Pavin Chachavalpongpun, a former Thai diplomat now living and teaching in Kyoto, Japan.

The Thai junta has even gone so far as to revoke Chachavalpongpun’s passport because of his prolific writing and online activity denouncing military rule in Thailand.

Thais have been warned against following, sharing or liking anything from three anti-junta dissidents, including Chachavalpongpung. It has stated anybody caught doing so can be arrested and charged under the Computer Crime Act.

“This law should be cancelled because it does not follow human rights principles,” Boonsophon said, as he set his smart phone on the table in front of him.

“They try to control social media because they know it can empower Thai people. In Thailand, so many people use Facebook. For the people who call for human rights and democracy, social media is very important for us,” said Kate Jangrew, a student at Bangkok’s Thammasat University.

Jangrew, 24, is a founding member of Democracy Restoration Group. She has been arrested and charged three times for organizing protests against the junta. She fears being arrested for simply liking a post on Facebook that could be deemed lese-majeste. Earlier this year, the junta informed Jangrew that she was being monitored.

“In my lifetime already there have been two coups. The first was 10 years ago. The second was three years ago. The military cannot give democracy to the people. They cannot make a good life for Thai people,” she said.

Any day now the coronation of the new Thai king, Maha Vajiralongkorn, will take place at the royal palace in Bangkok.

“We can definitely see that the new King could place Thailand at a critical juncture for its politics. What this man will do as the new sovereign could impact whether elections will happen soon. Monarchy still has a veto over military,” said noted Thai political analyst, Dr. Paul Chambers, a professor at Naresuan University.

Despite countless raids and arrests of Dao Din and Democracy Restoration Group members, Boonsophon and Jangrew both say they won’t be intimidated to stop their calls for a return to democracy in Thailand.

In the meantime, both will continue to defy laws they deem unjust and call for immediate elections. A new day will dawn in Thailand once the sun rises and the cicadas go quiet.